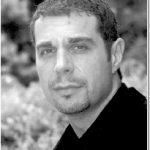 (b. 1966) Born of Italian descent in Chicago, Illinois, Joseph Lorusso made several trips to Italy as a child. There his parents introduced him to the works of the Italian Masters, the influence of which is still evident in his work today. Lorusso received his formal training at the American Academy of Art and received his B.F.A. degree from the Kansas City Art Institute. While in school, Lorusso majored in watercolor, so he considers himself self-taught as an oil painter. He learned to paint in oils by studying the works of master painters hanging in the Chicago Art Institute.Upon discovering the works of the Impressionists, Lorusso gravitated towards the works of Manet and Vuillard. Lorusso searched for work of similar emotion and soon became an avid student of the works of Sargent, Sorolla, Whistler and many lesser-known painters. Within this group of artists, Lorusso found a sense of identity and the power to convey emotion with power and confidence, yet with delicacy and tasteful restraint. He also saw in these artists the ability to express the “essence” of an object with just a few carefully chosen brushstrokes, creating a visceral and intuitive state of painting. Lorusso’s paintings have been described as warm and dreamlike, places of restful escape that share timelessness with the works of other eras. The mood conveyed in Lorusso’s paintings evokes a sense of beauty found in the quiet times of daily living. His people are mysterious, lonely, romantic and yet familiar. Lorusso’s paintings have gained notoriety by their ability to connect with the viewer, resonating in a way that is intimate and personal.