Skip to content
Ramon Kelley, of Irish and Mexican decent, was born in Cheyenne, Wyoming. Even as a boy, Ramon Kelley loved to draw. One of ten children, Kelley dropped out of school after eighth grade to work until he was old enough to join the Navy. The Navy exposed Kelley to the great masterpieces of European art, which he studied in detail. Kelley was inspired most by works from the Renaissance, French Impressionism, Russian paintings from the nineteenth and early twentieth century. After four years in the Navy, Kelley met and married his wife, Mona, in Denver, where he received a scholarship to the Colorado Institute of Art. After the birth of his first son, Kelley began working in advertising and illustration to support his family, all the while continuing to draw portraits in the evenings. Ramon Kelley found a gallery in Taos, New Mexico to represent his portraits, which quickly allowed him to focus exclusively on producing fine art. Since then, he has never ceased experimenting to further his skill. He has been named a Master Pastelist by the Pastel Society of American, which also elected him to the Pastel Hall of Fame. He has won awards for his work at exhibitions including the Prix de West Invitational, George Phippen Memorial, American Watercolor Society, Allied Artists of America, National Academy of Western Art, Southwestern Drawing Biennial, and the Colorado and Wyoming Governor’s Invitational. Kelley is now a member of the American Watercolor Society, Allied Artists of America, Knickerbocker Artists, Oil Painters of America, Pastel Society of America, National Academy of Western Art, and the Whiskey Painters of America. 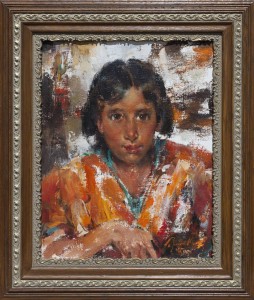